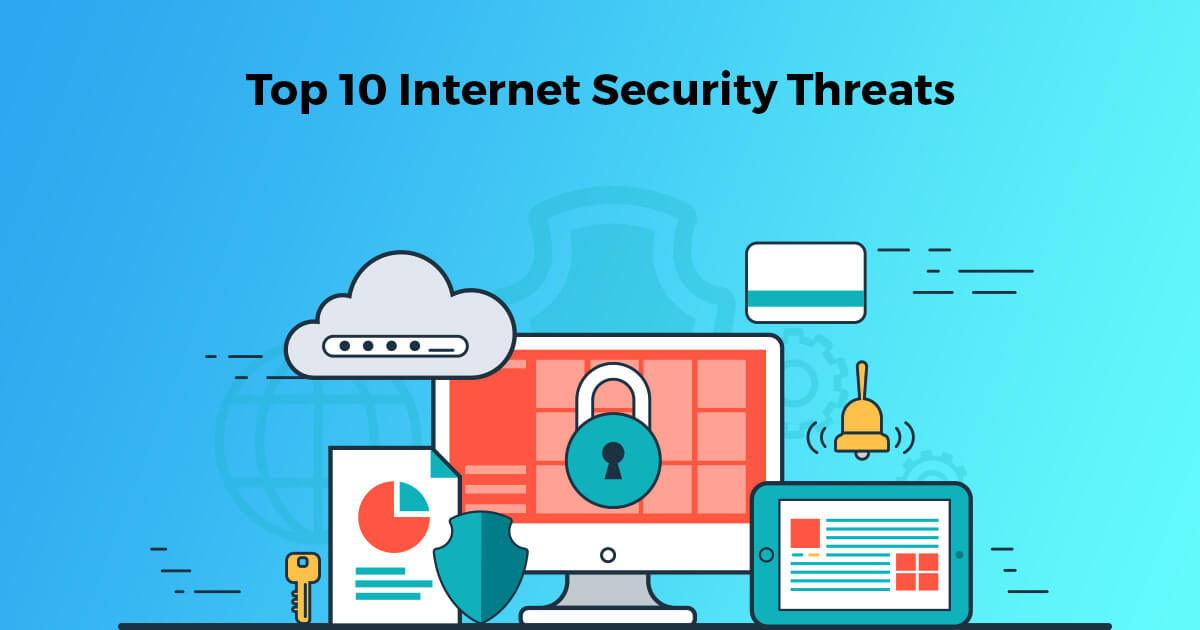 All of our communication and work is done on the internet these days. Be it sending a mail or net Banking, Internet has changed our life completely. But do you know that one-third of the world's computers are infected by one or the other type of malware? This made you worried about yours right? And that's the reason it is said that we need to take precautions in everything. Remember how we used to change our path seeing a stranger following us, we need to take the same level or precautions for our computers. And if you are thinking that your computer looks fine and is safe, there are chances that you might be wrong. And you surely need to know about the security threats that can cost you a lot. So if you care about the privacy of your data and device, make sure to read it by the end.

This is very common and people are aware of this term. But a virus in your computer can snatch all your peace in one go. And people who use the internet daily are at high risk. Also, a report showed that more than 30% of the personal computers are affected by one or the other type of malware where half of them are viruses. They are a segment of Software that is built to spread from one computer to another. Well, we can say it works similarly like a virus in the human body. Also, they are sent to your devices as email attachments or they are downloaded from other websites to infect your device. These Viruses can be really dangerous as they can steal your data, Personal information, passwords. This is not all; they can even delete everything on your hard drive.

This internet threat can track your browsing data. And by adware, it can be stated that this type of software which collected data with your consent. This is also a wide source of income for many companies and they do it by allowing their users to use the software for free. Adware can be a threat to your device as it slows down the computer and internet speed. However spyware also works similarly to the adware but it gets installed to the computer without the users’ consent. Is this is present in your device; you are at high risk of identity thefts. As spyware can steal and record your personal information including bank details. This makes it a really dangerous one!

Imagine the results of your exams are going to be live on a website in a few minutes. But even after you refresh the page several times, it still shows service unavailable. You just sit and decide in your head that the server is overloaded. Well. It happens that the server does crash due to rich traffic. But there is another side you are not aware of. That is the situation when the attackers overload the website with heavy traffic. They do it on purpose as heavy traffic will not be able to showcase content to the visitors. Meanwhile, DoS attacks are done with one device and internet connection making it nearly impossible to access the content of the infected website.

On the other hand, DDOS attack is similar to DOS but it's is way more forceful. It is very hard to get rid of a DDOS attack as it is launched to several computers which can be in any part of the world. If a device got infected by DDOS it is going to be very hard to find and locate the victims.

This is a threat that is not meant to be dangerous every time. The only danger with these pieces of malware is that they replicate very quickly and spread easily from one computer to another. The transmission is automatic as the worm from an infected computer sends itself to all the other contacts. And this chain keeps going. However, the spread also takes place when the software vulnerability occurs.

It is done to achieve the objective of stealing private information such as passwords, user Details, and credit card numbers. They come in the form or text messages or emails which let your Computer install the malware without any knowledge. They can also be sent as emails from banks asking you to provide OTP or details. Make sure you don't fall into this trap as it is really dangerous and can cost you a lot. Also, they can be overcome early by security tools.

Internet frauds are very common these days and scammers have found new ways to fraud users as they are taking necessary precautions. By rogue security software, they tend to make you believe that there is a virus on your computer and will ask you to Update or buy tools from them to get rid of it. Soon as you fall in the trap of downloading their program. The actual malware gets installed on your device.

It is a group of software that enables the remote control and administration-level access over your internet. Soon access is gained this can perform several illegal activities. They are equipped with password stealers and your antivirus might get disabled. They are installed in your computers along with legit software. The rootkit remains in your computers until the hacker activates it. Soon as it is done your data can be accessed by the hacker or fraud.

Man in the Middle Attacks

This cyber security attack allows the attacker to seize the communication between two people. This setting is meant to be private but the attacker can listen to this.

There are some types of Man in the middle attacks:

As the word refers to it is tricking someone to invite an attacker into a protected area. In computers, it has a very similar meaning we Trojan is malicious attacking software that makes the users fall into the trap unknowingly. It is often spread by emails and may look like an email from your known person while the attachment includes the virus or threat. They can also be spread when you click on a fake advertisement. Once they are installed on your computer, it can steal your personal information and passwords.

This type of threat is built to target data-driven applications by ruining the vulnerabilities in the application software they use illegal codes to get private data; they can change or destroy them too. With time it has become one of the dangerous privacy issues for confidential data storage.

You are aware of all the top internet threats that can ruin your computer or can steal your data. However,  it is very hard to ensure that your computer saves from any attack as the threat is penetrable. But all you can do is ensure the data you are browsing doesn't consist of any malware. Don't check any emails if they seem fishy. Moreover, you can take help from any cyber companies assuring best Assistance.