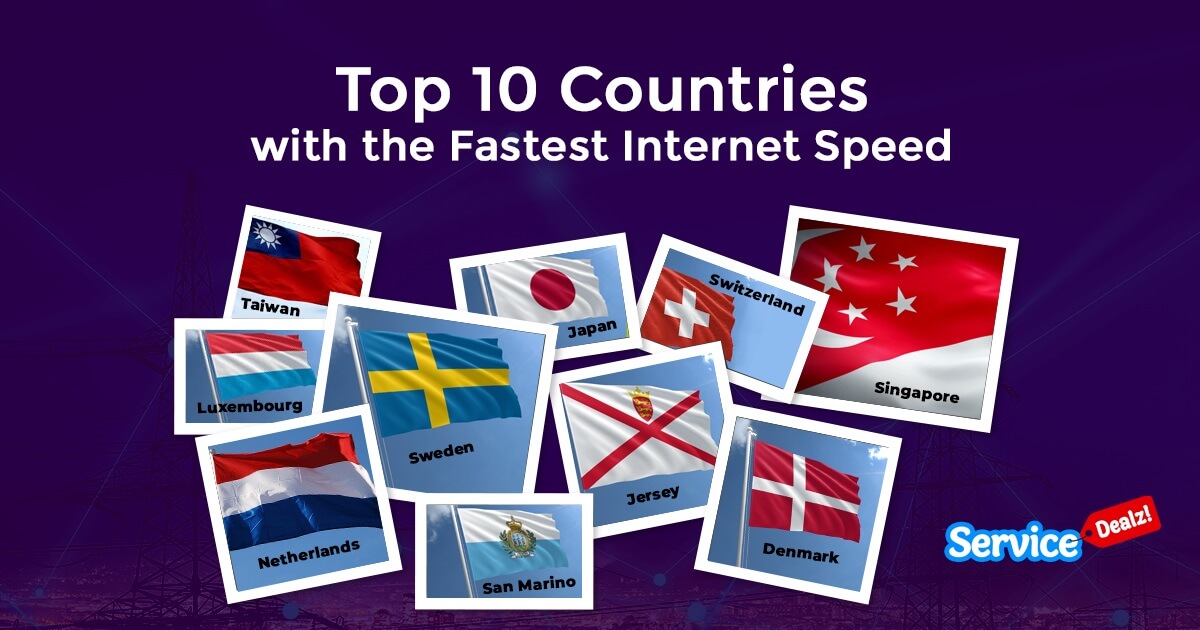 Digital nomads, whether they are doing a remote job or pursuing a digital career, would agree if I say internet speed is one of the most critical factors when choosing an internet plan. In this post, I have put together a comprehensive list of the top ten countries with the fastest internet speeds. But before we check that list, it is prudent to have a quick discussion on what all are the benefits of having high-speed internet at home or office?

Why speed is important?

The biggest advantage of high-speed internet is increased speed of downloading documents, carrying out online research, working with customers in real-time, and many more. Faster broadband facilitates remote working and smoother communications. In some situations, you slow internet can seriously affect you. Hence, there is zero tolerance among users for slower internet while performing critical operations such as financial transactions online, and other important tasks that require seamless connectivity to the internet.

Internet is getting faster globally…

Global internet speed is now faster than ever before with the previous year producing a global average speed of 9.1 Mbps. And, this year it has shown a remarkable rise of above 20% compared to last year (about 1.90Mbps). Notably, developed nations are the top contributors to this rise as they have established infrastructure in place and, when required, can easily roll out the latest technology. In comparison, we see little development, insignificant change in availability, and rollout as well as uptake of faster infrastructure in the countries with relatively slower speed of internet. In fact, the countries with the fastest internet speed are more developed and smaller whereas those with slower internet are less developed and larger. While most of the countries with slowest internet speeds are clustered in Africa, countries with fastest internet are located around Europe.

We carried out a detailed research and analysis to come up with a list of the top 10 countries with the fastest internet speeds in the year 2019. Here’s the list for your convenience:

Taiwan ranks number one in the world when it comes to the fastest speed of internet. The country has an average speed of 85.02 Mbps. Though it is an official autonomous territory in China, it is considered an independent nation by most. The country is highly developed and its major cities have fiber to the premises (FTTP) capable of delivering the fastest internet in the world. However, many rural areas and cities in this country still have slower internet speeds.

A country with vibrant digital economy, Singapore is the second name on this list of fastest internet speeds with an average speed of 70.86 Mbps. More than 4 million (75% of the population) Singaporeans are socially active on their mobile phones and over 85% users have an active internet connection.

Probably you have not even heard of this place in the Channel Islands. Jersey is amongst the top 10 countries with the fastest speeds of internet worldwide. Those living in Jersey enjoy an average internet speed of 67.46 Mbps.

Following Norway, Sweden sits on the third position in this list with the internet speed of 55.18Mbps. The country is the fastest in Europe (as per the latest data).

With a speed of 55.18 Mbps, Denmark is a country that boasts of highly advanced internet infrastructure. Majority of Denmark citizens stay connected to the web and enjoy this high-speed internet connectivity. The country ranks in the 5th place by the fastest internet speeds in the world.

Having an average speed of 42.77 Mbps, Japan is moving towards even faster internet with fiber optics running throughout the country. With high-speed fiber optic, the country has the fastest peak speeds (which is nearly triple the world’s average for internet users).

With an average speed of about 41.69, the Luxembourg sits comfortably at the 7th rank in this list of top ten countries by the fastest internet speeds in the world. Thousands of homes benefit from the high-speed internet every year in Luxembourg.

Netherlands has marginally lower speed compared to Luxembourg, which puts this country on the eighth position in this list of top ten countries by the fastest internet speeds. The average internet speed here is 40.21.

Switzerland has average speed of 38.85 Mbps, which puts it at number nine in this list. This country boasts of one of the world’s most advanced free-market economies with GDP per capita around 80,189.70 USD (as of 2017).

San Marino is at number ten when we consider the speed of the internet across the globe. The country has average speed of about 38.73 Mbps. The economy of this country is focused around banking, electronics, furniture, spirits/wines, and apparel industries. Additionally, philatelists can buy collectible postage stamps here. Wine and cheeses are the main agricultural products.

Please note the ranks may change/fluctuate in the future depending on the average internet speed change in the countries and regions. This list is based on the information our team of researchers found online and the ranking is taken from online sources only.