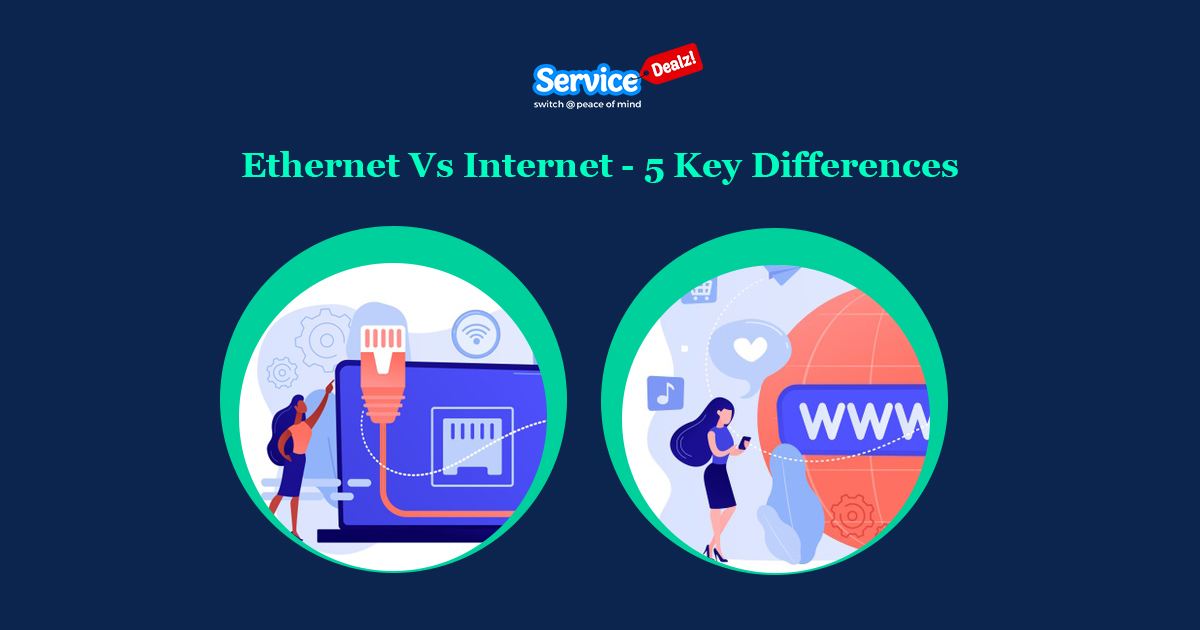 Many people like you are familiar with and rely on Internet technology if they want to get online and find or buy something of use. Isn’t that why you are reading this blog?

However, there is another type of technology called ‘Ethernet’, which people are aware of. It is still extensively used across the globe. If you are eager to know about the concept of electronic communication, you must know what these technologies – Ethernet and Internet – are.

In this blog, we will talk about five major differences between Ethernet and Internet.

Ethernet – being a computer network – is a way of connecting devices in LAN (short for Local Area Network). Introduced in 1973, Ethernet can not only be used in LAN but in MAN (Metropolitan Area Networks) and in WAN (Wide Area Network) as well. This type of technology is deemed best for gaming purposes too.

Comprising of an Ethernet cable, hub, router, and crossover cable, this technology offers a standard way to allow devices to transmit data over a network. In other words, it is a scalable interface that connects many devices, including machines and switches.

If you compare the thickness of an Ethernet cable with that of a telephone cable, the former is somewhat thicker. And at the top, you will find an RJ connector along with other essential Ethernet requirements.

Internet is a global system or digital network to connect worldwide computer networks. When it comes to transmitting the data, it relies on the TCP/IP protocol. With the aid of the Internet users can easily exchange information they wish to.

Moreover, the Internet simplifies the process of exchanging information and not to mention, the provision of services, including WWW (World Wide Web), file sharing, PCs, routers, etc. All of these devices connect to each other on the Internet with the help of cables, cutting-edge technology like fiber optics, or even a wireless network.

The Internet provides a plethora of services to the users, like file sharing and electronic mail (Email). However, the most common of them all is hypertext documents and applications of the World Wide Web or WWW.

Differences between Ethernet and Internet

Aside from being computer networks, there are some major differences between Ethernet and Internet which are listed below.

You very well know about the Internet, don’t you? That is what you are using to gain access to this blog. However, the majority of people are unaware of Ethernet. Although Ethernet and Internet are usually found together, they are different in every sense of the word. If we go by the definition, Ethernet is a way of identifying a group of technologies that seem necessary to allow interconnected computers to share files as well as data between them.

On the other hand, Internet talks about the global connection of computers and networks that rely on protocols for the purpose of sharing data between them. In order to have the data shared between computers and networks, there has to be a standard, and it is the compatible standard of Ethernet that allows the Internet to work.

When it comes to sharing data between some computers in a LAN, Ethernet is a network that you rely on. The computers connected to the network are within a building. Using cutting-edge technology and enhanced Ethernet cables, the range of Ethernet can easily be extended up to ten kilometers.

The Internet, on the other hand, is a global system where the interconnected computers and networks share data by adhering to some standards. Both private networks and government networks are connected worldwide to share files or information, or exchange of data. There is a lot we can do using the Internet, like visiting websites, sending emails, and sharing many files.

When it comes to security, there are lots of differences between Ethernet and Internet. Ethernet, being a closed network, is usually safe. That is because the people outside the network don’t have much access to the network.

When we talk about Internet security, there is open access to all those computers that are connected to the Internet. While people can gain access to any information online, there are several hackers who can gain unauthorized access to your computer and steal your personal information, including bank account and credit card details.

They can even corrupt the files on your computer by planting viruses. So you don’t need to worry as you can always rely on an effective anti-virus program to keep your information secure on your computer though you’re connected to the Internet.

Ethernet is where printers and modems are connected to the PC (computer or laptop). The modem allows your computer to connect to the internet. Once connected, you can access multiple websites on WWW (World Wide Web).