Difference Between Wi-Fi and Internet 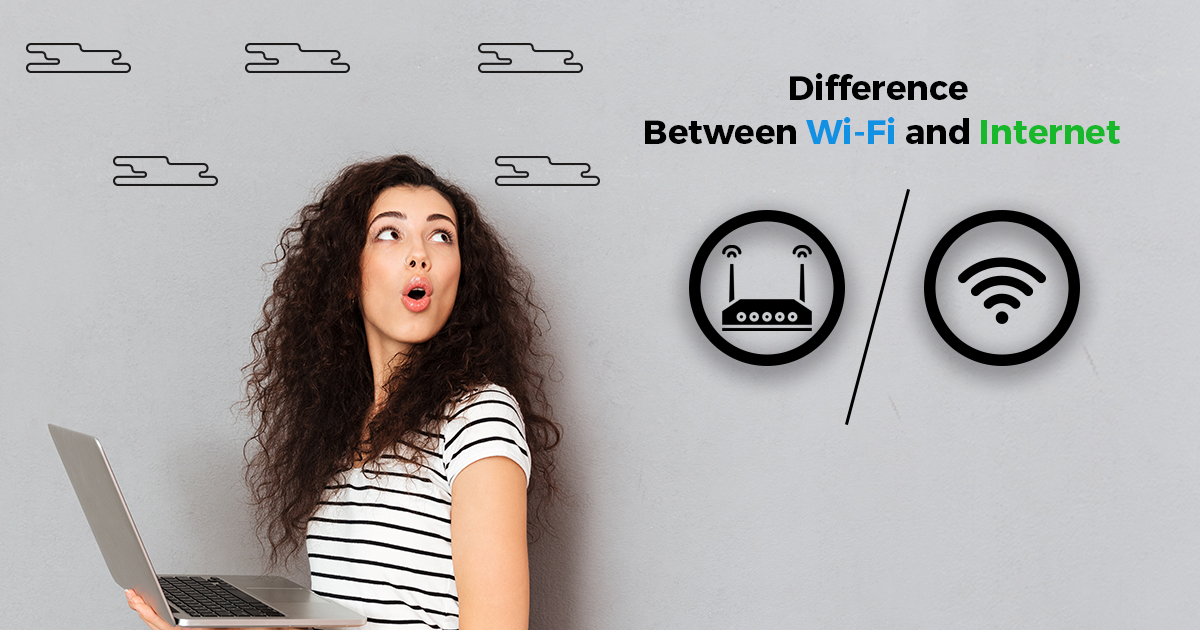 All I know is that the internet has transformed the world completely" As in globalization the internet is the most powering source we could ever have. But do you know the Internet is a language? Well, I am clarifying this as there are many questions on the internet asking if Wi-Fi and the internet are the same things. If you also think the same way, let me tell you they aren't the same. I know they are used synonymously but they are just two different things. And also it is very easy to understand the difference between them. All you need to do is gather credible information. But as you have reached just the right website, you don't need to worry about that. I will make sure to provide a detailed knowledge about everything you need to know about the often confusing term, internet and Wi-Fi. But more importantly in this post, you will learn how the Internet and Wi-Fi are linked together but are still different. Trust me; it’s going to be interesting!

So let's begin with the basics

Internet is like a language that allows a source to send and receive information to and from another source through the internet protocol. It can be said that internet is the huge network of networks that connects millions of computer around the world so that the users of one computer can interact and share data with any user sitting in the opposite corner of the world as long as they are connected on the internet. This is why it is said that "The power of the internet is extreme" While Wi-Fi is more like a source that provides internet access to your computer, mobile phones and other devices within a limited range. Now when we are done with the basics let's quickly move on to the description of both the Internet and Wi-Fi.

The Internet is something that changed our world completely. Earlier gaining even a bit of knowledge would take hours but now it is just a few clicks away. And the internet made it possible! And we should be thankful for Robert E. Kahn who first invented the internet. Soon it became the mode of communication in the late 90s. Now that it is a crucial aspect of our lives it is imperative that you know everything about it. So as we know the internet is a widely spread network of networks globally. It is an interconnected network through with information can be sent or receive from one device to another. Earlier it was not meant to be faster but with the growth of digitalization, it has become really fast. And the aggressive spread of 5G networks by many internet providers is the lively proof of it.

It is a source through which you can get wireless internet access. This is one of the major reasons why it is different from the internet and how they both aren't the same thing. Earlier internet access to the computer was made possible with the help of wires. But Wi-Fi connects your device to internet access without any wires. If we talk technically, it can be said that Wi-Fi is a Wireless Networking technology that provides wireless internet access to your computer, smartphones within a set range. This technology will allow your devices to communicate without any Ethernet cable, network cable or any physical connection. The piece which is usually for this connection is a router. We will learn a detailed understanding below.

Wondering about the difference between Wi-Fi and the Internet?

Get your answers here! I have tried to make it clear and understandable. With respect to the same, you will find a quick differentiation of Wi-Fi and the internet on the basis of a few factors. These factors will surely clear the difference between the two and if you find it helpful, don't hesitate to share this with people having the same confusion. As we are already aware of the meaning of both the internet and Wi-Fi, here you will find three major factors i.e. Technology, working, and Dependability.

Wireless internet connection widely known as Wi-Fi uses radiofrequency waves to send and receive data across a network like a computer, smartphone but most importantly you need to know about the access point. The point of access can be described as a source that Establishes links with wireless devices using Wi-Fi. The devices must be connected with the wireless network adapters to join a wireless network. On the other hand, the internet is a built networking setup that allows you to access the information from one source to another across the world via TCP/IP protocol. The information is transferred through the internet using predefined governed rules by the TCP/IP suite.

Internet is a telecommunication network, more like a networking base that uses the protocol suite (TCP/IP) to connect with the technology devices all over the world. This network allows you to access information from other computers using the TCP/IP protocol. However, if we see Wi-Fi, it is a basic wireless networking technology that provides internet access by sending and receiving signals through radio waves. In simple terms, we can understand it as a networking protocol that let the devices to connect wirelessly. The major difference in terms of technology is that Wi-Fi is just a medium that allows the user to connect to the internet.

Do you think the internet and Wi-Fi are dependent on each other? Well, as of now you need to know that they aren’t dependent on each other and soon you will understand why. Okay let's understand with an example of a printer that has inbuilt Wi-Fi connected to a Wi-Fi network and it can print without the internet. As it is a source that acts as a router to carry internet signals to your device so the devices can send or receive data with each other over a Wi-Fi network without the internet. The same goes for the internet as it doesn’t rely on the Wi-Fi network to connect to different computers worldwide. It connects millions of computers globally via the World Wide Web. Now I am sure it’s clear in your mind, in case of any confusion you can refer to the internet and search for more.

Conclusion: All these factors prove how the internet and Wi-Fi are two different things for real. Though they are linked, they are not similar. I tried to add all the imperative aspects that you needed to know and if you find this helpful, don’t forget to thank us and visit our website for much more useful information. Thanks for your time!