When is the Best Time to Switch Electricity in Texas? 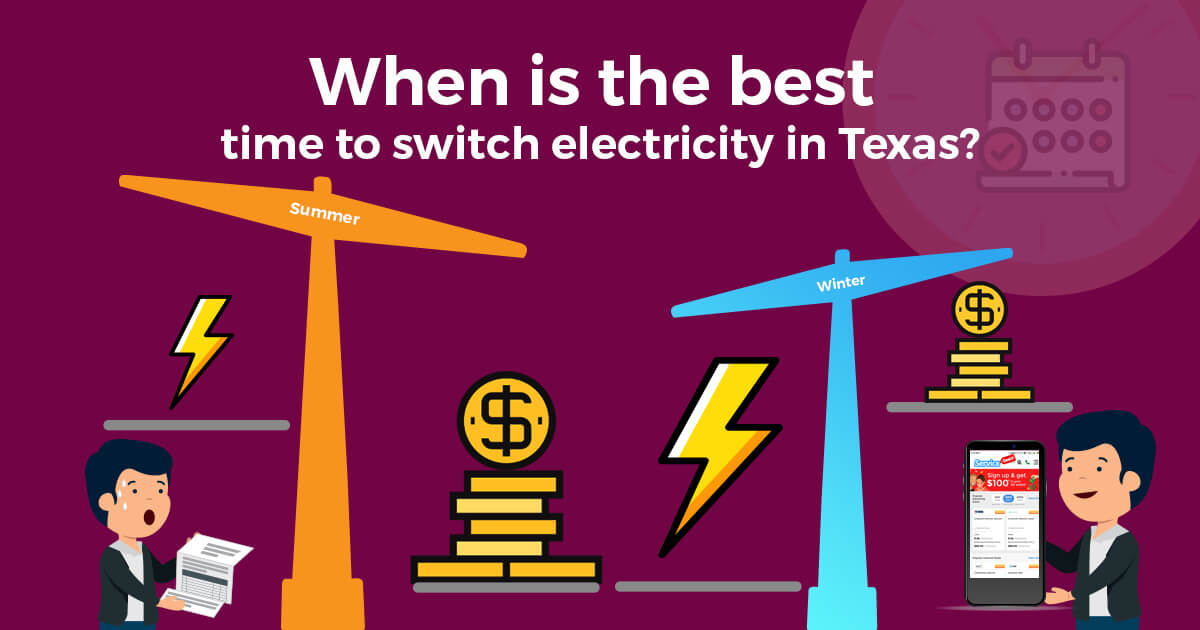 When switching electricity, we all want to lock in the cheapest electricity rates. In our haste to make a service switch, we often neglect the most important contributor to finding the lowest electricity rates and that is the TIME. Your timing of the switch can make all the difference. Remember there is a strong relationship between the cost of energy and demand. Electricity rates fluctuate on a daily basis, which make it difficult to pinpoint the right time to make a switch. With ServiceDealz, you can rest assured for we’ll extend all the assistance you need in order to make an informed decision and choose the best electricity plan.

Prices of electricity are steadily ruled by the demand and weather conditions, except in the case of large-scale accidents and natural disasters. Electricity prices surge when demand surges and plunge when demand plunges. If we talk particularly about Texas, summer is usually quite hot and humid here and, as a result, there is a skyrocketing demand for electricity in the state. In 2019 alone, wholesale as well as retail energy rates witnessed an all-time high owing to the soaring mercury. Similarly, when demand is low (which is usually during winter), electricity rates also go down.

We see this pattern mainly because when demand increases, there’s a need to produce more energy. And extra demand puts additional pressure on the utilities to use alternative energy sources for meeting the increased demand. This adds to their operating costs. For example, when electricity demand registered a record-high in Texas last summer, energy rates also increased exponentially during the months of May, July, and August. To cope with this sudden rise in demand, coal plants had to be used alongside the natural gas plants.  Notably, while coal plants are costlier, they aren’t as effective as natural gas plants. There was a considerable jump of around 2.9% in Texas electricity rates that began in the month of March and continued till the year-end.

As electricity rates are directly affected by the consumer demand, it makes sense to note seasonal trends of energy demand round the year. To sum it up, demand for electricity tends to increase during summer and, sometimes, winter months while it is the lowest during spring and fall months. This pattern is quite obvious and normal. But talking about Texas, specifically, summer tends to be hotter than other states and that results in increased demand for electricity during summer months.

Electricity demand is low between December and March

How to make your electricity bill immune to fluctuating market rates?

Market rates of electricity fluctuate every day but you can provide your electricity bill with the shield that makes it immune to these price hikes.

With ServiceDealz, you can lock in the cheapest electricity prices from the top electricity providers in Texas and enjoy cheaper energy throughout the year. It’s easy as 1-2-3! Start your search by entering your area zip code, add deals to compare, and choose the deal that best fits your usage and requirement.

Do you know how you get electricity to your home?

Also referred to as TDSPs (Transmission/Distribution Service Providers), TDUs are Transmission and Distribution Utilities. The TDUs & TDSPs that serve in Texas include:

These companies ensure the transmission and distribution of electricity to homes and businesses in a specified area. A TDU owns, repairs, and maintains the power lines, poles, wires, and meters in their serviceability area. Since TDUs have to maintain the infrastructure to bring electricity to your home, the cost changes and increases accordingly.

Call us for help in choosing the best electricity deals. Let’s simplify the electricity switch for you!