What are the common causes of high electricity consumption? 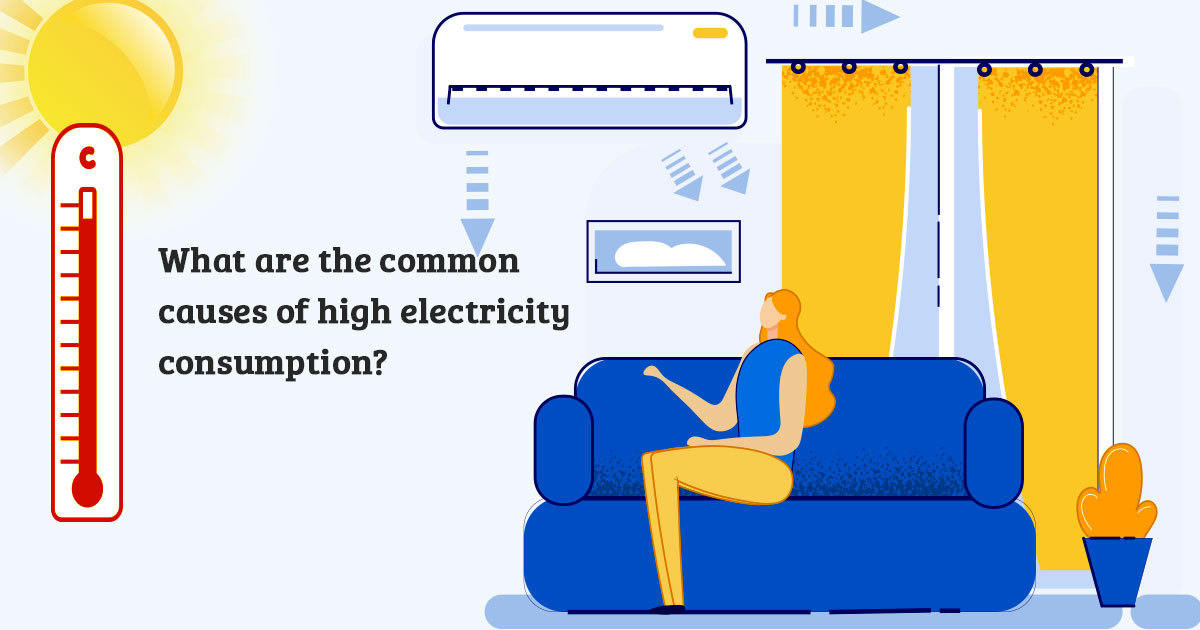 You check your mailbox curiously to see who all have dropped in some useful messages for you. But what you see is what you are least interested in and it is your big electricity bill! You open the mail and are once again shocked to see unusually high electricity bill for the month. It might be even double of what you got last month. Why is it so? You wonder, “why is my electricity bill so high?” You have failed to figure out the cause that might have resulted in this bigger bill. Why last month it was low and suddenly became so high this month? Hundreds of questions might be moving in your head with the answers evading.

Trying to decipher the cause of your unusually high electricity bill may appear tricky, but this isn’t the case in reality. It is not as big a challenge as you might think it to be. The key to countering this issue and keeping your bills lower is to check your energy usage (in kWh) as the prices of electricity tend to go up and down (almost on a daily basis) in the deregulated energy market of Texas. As the prices increases and your consumption of energy also goes up, you get bigger bills. This is the scenario when you are in a variable cost plan where the cost of energy is determined on a daily basis, based on the market rates. You might enter a plan that promises you the “cheapest electricity rates in Texas” only to realize later that the prices have changed over the months and your electricity bills are getting bigger as a result.

In this post, we’ll quickly discuss the most common causes (that often go unnoticed) of sudden increase in electricity consumption and, hence, bills.

1. Extreme Hot or Cold Weather:The biggest culprit is the weather. In states like Texas where summer is sweltering and temperatures rise too high to tolerate, usage of air conditioners and other cooling appliances at home increases as the mercury rises. The hotter it is the bigger your electricity bills get. The impact of increased use of air conditioners and other cooling appliances is directly seen in the bills that you get at month-end. Sometimes, we turn blowers and heating systems on during winter to keep cold waves out. This may also cause energy consumption to increase even if the weather isn’t that bad.

2. Old and Outdated Appliances: Appliances that consume more power. Old appliances may be dear to you and you may feel nostalgic on the thought of throwing them out of the house and replacing them with the latest ones. But, mind it, these are the vampires that are actually devouring all your electricity and contributing to the bigger bills that you receive every month. You may consider replacing these with the updated new ones with more stars for energy conservation. See the magic your new energy-efficient appliances can do to your electricity bills every month.

3. Light Bulbs that aren’t Energy-Efficient: Choose energy-efficient light bulbs to save more energy and keep your electricity bills under control. The other good thing you will do is try using the lights and ceiling fans strategically. You house must be properly insulated to maintain the temperatures in all seasons.

4. Overcharged Devices: Also, make sure to keep the devices aren’t charged unnecessarily as that might also put additional pressure on your electricity meter. Don’t leave the doors and windows open while the AC is on. Use fans whenever possible and avoid excessive use of air conditioners.

While you take all these and other important measures to keep your consumption low during different weathers, it is important to review your electricity plan also and lock in the cheapest electricity rates in Texas from the top electricity companies. Go for a fixed-cost electricity plan rather than a variable-cost plan and enter a contract when the prices are the lowest, which you will find most probably during the months of December to March.